I was once discussing this matter with an Iranian friend who was  surprised to learn this fact, she Asked me about the  type of  food we offer  our guests during big ceremonies like marriages, and whether we need to bake tons of bread to feed them,  I said that we have other alternatives like couscous , and other local handmade pasta which play the same role as rice in other countries  and invited her to try our Algerian tlitli  ( clic ) that she liked very much.

Wheat is a significant agricultural product in Algeria but the demand for this crop is so high that the government  is compelled  to import more quantities, making the country  among the top ten importers of wheat in the world  , (according to ArabicNews.com)

Like in many other cultures of the world, bread  to Algerians, means more than just food to nourish the body. it has a variety of spiritual and social values that we can detect in the many proverbs and idiomatic expressions that call for the word « khoubz  » or  » kssour » the plural of  » kesra » which litarally means bread in Algerian dialect.

Algerians speak Arabic and a variety of Amazigh/ berber dialects, so bread in Algeria has many synonyms, khobz, kesra, aghroum…..

we say khobz when we speak about bread as a general term, and kesra when we refer to the flat , round, Algerian bread in contrast for example to the french loaf

the Amazigh regions of Algeria, like  Kabylia and Aures use the word Aghroum to refer to bread.

For many years, I was puzzled with the meaning of the word  » kesra » especially after discovering that is also used in Sudan….so thanks to uncle google i came to know  that  » kesra » means « a piece of « ……..something in old arabic , and even found a poem with the phrase » kesratou khobz » meaning a piece of bread.

One of the specificities of Algerian bread is the use of fine semoulina which needs lots of kneading compared to flour based breads.

Algerians cook their kesra on clay griddle called tajine , that is often   put on a sort of brazier  or a tabouna.  tabouna and tajines are important cookware equipements  for Algerian families, you’ll find them  in every household across the country, even the busiest working moms who don’t have time to cook their own bread, will keap these two elements  in their kitchen  in order  to make kesra  during  lasy weekends  or for  ramadan dinners. 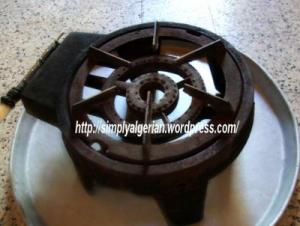 clay tajine, put on the tabouna, ready to cook the kesra:

kesra getting cooked on a metal tajine:

on these tajines, various Algerian bread and delicacies are being cooked, such as :

Kesra matlou which is a leavened, spongious bread , excellent for  main courses dishes or dips:

more dense than the former, but no less delicious. rakhis contains no, or less quantity of yeast in addition to the presence of oil 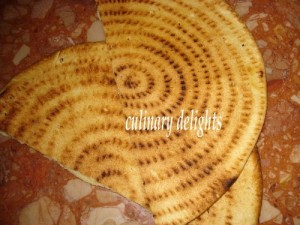 the plain type of tajine  is also used to make baghrir , a North African pancake that you can also find in Morocco and the west part of Tunisia 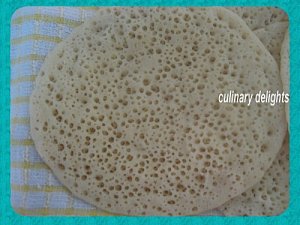 Mssemens are  north african crepes, that remind us of the indian parathas. in Algeria, we call the plain version mssemens and the stuffed one mhajebs. the dough is made out of semoulina  which gives them crispiness and character in comparaison to the flour made versions.

mssemens are cooked on a metal griddle called mraa ,placed  on the above tabouna.

Other than  the tajine  cooked breads, we have also oven baked types that we call khobz koucha or khoubz edar . these breads are made of fine semoulina flour, and enriched with oil, eggs, milk,  and /or zest of orange and orange blossom water.

khobz edar is traditionaly  prepared during ceremonies , ramadan , eid lakbir but also for our own pleasure when we feel like eating it.

In addition to the former types of bread which has been prepared by Arab and amazigh women of Algeria for thousands  of years,  the legacy of french bread culture is very evident in modern Algeria.

The French introduced , their well-known loaves of bread, brioches and other types of european like bread during their presence in the country that lasted more than a century .

In all  Algerian bakeries and bread stores, you will not only find the uniform baguette, but also multiform ones , crowns, sesame round loafs, flat loafs,  brioche, sugar breads , placed proudly on the shelves .

NB: Thanks to my friend kooky who provided me with the pictures of tajines and tabouna